I had my first contact with orchids in the early 1970s. My father gave my mother a cattleya orchid for a milestone birthday. This plant had already cost 60 DM at the time and then died after a short time.

My interest in orchids was sparked. There was no internet back then - information had to be collected from the few specialist books or through contacts of like-minded people, e.g. from orchid associations. As a member of this association, I was soon struck down by an illness – the orchid virus, which has not let go of me until now!

A not insignificant part of my training allowance and salary later in life was converted into orchids and soon a heated greenhouse was set up in my parents' garden.

In the course of my professional life I have moved two more times - a new orchid greenhouse was built every time at the new place of residence.

The passion for the genus Paphiopedilum was founded in the late 1970s with a visit to the orchid nursery Elle in Hambühren:

On a plant table stood about 3500 lady's slippers - Paphiopedilum curtisii; most of it was in bloom: 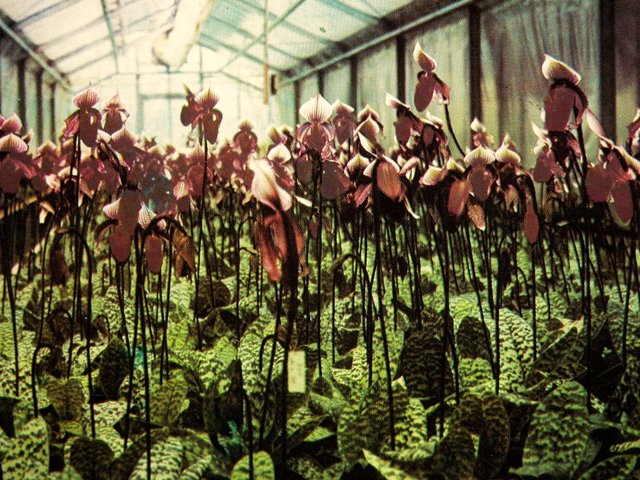 I stood reverently in front of these plants and was unable to move for a long time!

But it got worse:

In the next greenhouse, a Paphiopedilum rothschildianum with 4 flowers bloomed - the sacred kraal of the lady's slipper orchids was live in front of me. At that time there were only a few plants in cultivation - and then this onw was also in bloom. 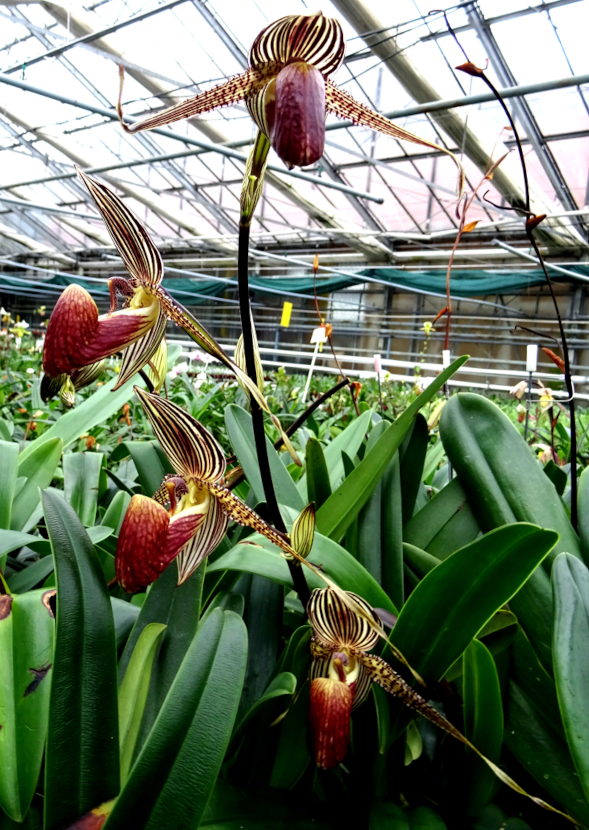 In the course of time, I got to know different nurseries where you could buy lady's slipper orchids.

An overview of the individual species from the genus could to that time be found in the American orchid magazine "Orchid Digest". Jack Fowlie reported there about his expeditions to the sites of Paphiopedilum over many years - with amazing pictures, too.

Around the turn of the millennium, almost ten new species of lady's slipper were discovered in Vietnam - the opening of the border in the Indochina area also gave botanists the opportunity to look intensively for new plants.

So that the lady's slippers are not endangered in their natural habitat by our passion for collecting, many species have been propagated by in vitro offspring.

As a result, a large part of the Paphio species are available as offspring today.

At the beginning of my passion for these lady's slipper orchids there was the idea of cultivating as many species as possible and then ultimately photographing them - that quickly turned out to be an illusion. Over the past few years, individual species have always been on offer, others were not available.

Each time a nursery or orchid exhibition was visited, the individual species were photographed on site. Good friends of mine made their own pictures available to me for this homepage. This is the only way the homepage could come into being. Thank you very much for helping me with this project!