An important topic in orchid culture was and is the correct handling of pests and diseases of orchids. A few years ago, the Federal Office for Consumer Protection and Food Safety carried out a reassessment of the approval of plant protection products in Germany, especially in the allotment garden sector or private plant breeding.

Known and effective means are no longer available for private orchid cultivation and we have to look for alternatives.

In organic gardening, a new product is being advertised as a kind of miracle cure: neem oil, also known as neem oil. The purely ecological agent, which is obtained from the seeds of the Indian neem tree, is effective against a wide variety of pests such as beetles, caterpillars, lice or spider mites as well as against fungal infestation and snails. If you spray the neem oil as a solution directly onto the leaves, it helps against acute pest infestation. If you add it to the irrigation water, it strengthens the plant from the inside out via the roots. The great advantage of neem is that no resistance develops in the various pests. Beneficial insects such as ladybugs and bees should not be endangered by neem.

This is due to the active ingredient azadirachtin contained in neem, which, however, does not kill the pests immediately. It only causes a loss of appetite and the willingness to reproduce is greatly reduced. This active ingredient is broken down in the plant after three weeks. Neem products should therefore be used as a precaution every two weeks!

Neem oil is not soluble in water, so an emulsifier (such as Remulgan) is needed to make an aqueous solution. I sprayed the neem oil over my orchids in the prescribed dosage for several months. I could hardly find any pests during this time.

However, paphiopediles that emerge from the base of the new leaves have had some flower shoots stuck. It is known that oils can clog the stomata of plants and that the flowering shoots of my orchids have also been damaged.

Through further research on this topic on the Internet, an orchid friend and I have found new insights on this topic:

Neem oil is soluble in warm water without the addition of an emulsifier. The water temperature should be between 30° and 40° degrees. At higher temperatures, the active ingredient azadirachtin is destroyed! The prepared solution must now be shaken vigorously for some time. If the water then cools down, the oil settles on the surface and a milky solution with all the active ingredients from the neem oil remains in the water.

A clean separation of water and oil is possible via a glued-in small water tap (see figure) when the lid of the bottle is screwed on. The oily residue in the bottle must then be washed out with warm water... 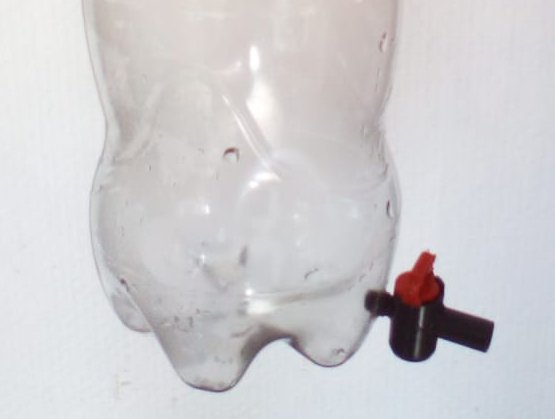 The orchid friend's orchid display case was extensively sprayed with this neem solution and all orchids were watered with it. After a week, the mites and lice that were previously found on the orchids were gone. This treatment was then carried out weekly with the neem solution - no more pests have been found on the plants or in the pots for three months.

To increase the effect, the required amount of neem oil is mixed with the same amount of alcohol and extracted with it for three hours before this mixture is then added to warm water.

Parallel to the experiments in the orchid friend's orchid display case, I also tried the neem solution in my greenhouse and got similar positive results. There are hardly any pests to be found on the plants and new buds are constantly sprout on the paphiopediles.

The recommended dosage of neem oil is 1% (= 10 ml per liter of water) - 0.5% is recommended for sensitive plants. For certain pests, a proportion of 0.00001% neem oil is said to be sufficient for pests to avoid these plants.

This neem solution is now sprayed over the leaf in my greenhouse every two weeks with a fertilizer solution over the leaf. I need 25 liters of water for one spraying process.

One day before spraying, 25 ml of neem oil (= 0.1%) with 25 ml of alcohol (isopropyl alcohol or denatured alcohol) is placed in a small beaker for 3 hours and shaken well. After that, one liter of rainwater is heated to 30° to 40° degrees with an immersion heater and then put into a bottle with the neem/alcohol and shaken vigorously for several minutes. This shaking process should now be carried out repeatedly for several hours so that the active ingredients can be released from the oil.

In order to save myself this intensive shaking process, I put the existing mixture in a glass and aerate this extract for 24 hours with an aquarium air pump. During this time, the mixture cools down and the oil settles on the surface, which now has to be fished off with a small ladle. What remains is the milky neem extract with almost no oil, which should be consumed in the short term. 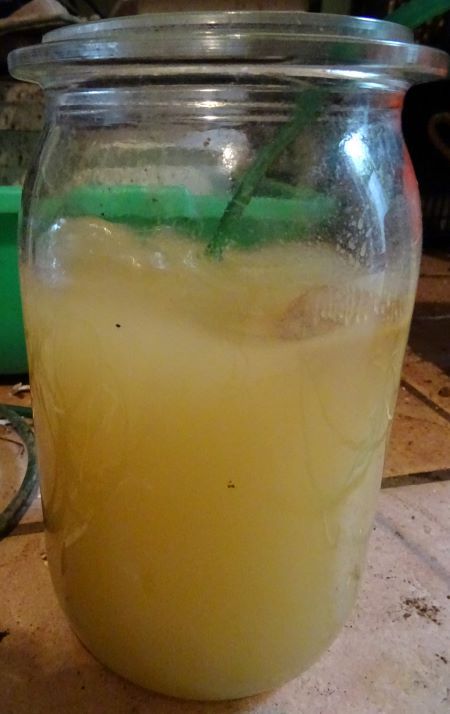 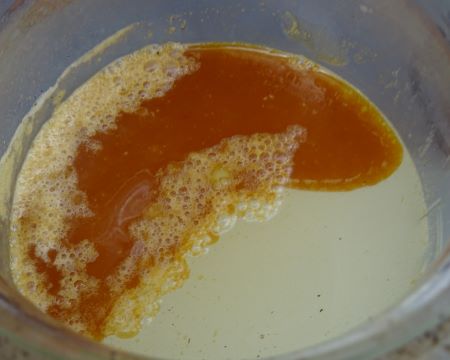 The brownish remains of the oil on the surface can now be skimmed off and the milky extract is added to the spray water - the conductivity of the water is only increased by 30 µS.

Try it out - crop protection without poison!